Each day at the Lord’s Mission Central is a true MIRACLE!  Stop for a moment and ask yourself….”What 91 year old lady would come from Hampton, Nebraska and travel all the way to a place in the hills of Western Iowa to an old set of farm buildings in the middle of nowhere to spend an afternoon…when walking is such a problem and has to move only in a wheel chair?
Well, that’s the kind of special Christian NOT NORMAL people that the Lord sends to see HIS Mission Central!  Yes, on Thursday afternoon at 4:00PM on August 25th…God called a dear and special Missionary friend by the name of Gretchen Troester, age 91 to have a special tour of more than 2 hours!  Gretchen lives on a farm near Hampton, Nebraska and her dear daughter Anne Daly of Aurora, Nebraska, lives just down the road from Gretchen, and Gretchen’s special nurse and care taker, Debbie Williams the caretaker from Hastings, Nebraska wanted to come and help also.   These three special Christian friends came all this way to see what God has done here at HIS Mission Central!
It was an absolute JOY to welcome this group and here you see dear Gretchen in the Lord’s Creation Theater, and then the entire group in Gary’s office with our Boss in the background.  From left to right Debbie Williams, Gretchen seated and daughter dear Anne Daly.  It was truly one of those special days that none of us will ever, ever forget.  We thank God for sending us special friends and helpers for Jesus like this special group.  It was truly a day old Missionary Gary will never, never forget!!!! 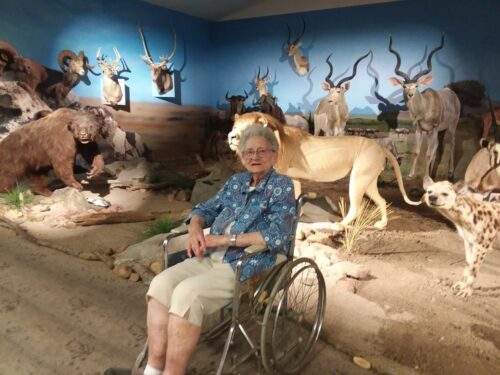 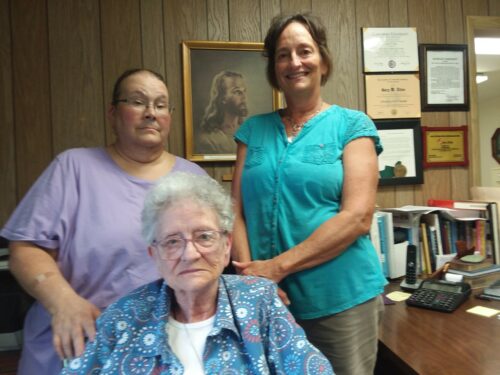 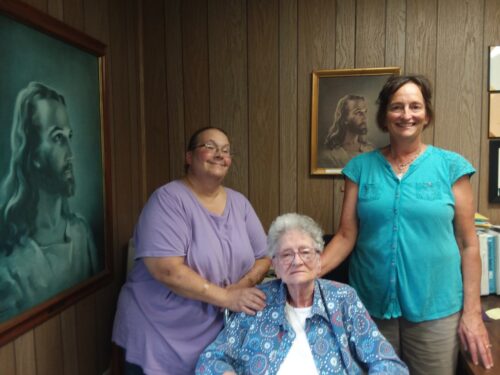