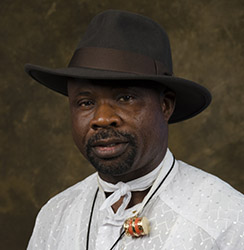 Rev. P.A. Richard-Wokoma serves through The Lutheran Church—Missouri Synod (LCMS) as a theological educator in Africa. He also preaches and presents workshops to congregations and villages throughout Africa.

Rev. Richard-Wokoma was born in Africa. He graduated from Schiller International University, London, in 1985 with a bachelor’s degree in international relations, and in 1986 with a master’s degree in international law. He then attended New York University and started on a doctoral degree from there. During this time, he decided to attend Concordia Theological Seminary, Fort Wayne, where he received his Master of Divinity in 1997. During his seminary vicarage, he studied at Drew Theological School at Drew University, Madison, N.J., and received his Master of Sacred Theology degree focused on patristic and early Christian liturgies.

Once finished at seminary, Rev. Richard-Wokoma returned to Africa to translate the Book of Concord into his native language, Kalabari. He also preached in local African congregations and conducted Bible studies and led devotions. In 2001, he received a call from the LCMS Texas District to serve in the Houston area. While in Texas, he served as director of the LINC Bible Institute and traveled to Africa several times to teach seminarians and pastors. In Sept. 2013, he accepted a call to be a theological educator in Africa. Since this time, he has been teaching and preaching at different congregations each week.

Pray for Valerie as she serves in Togo. Ask God to keep her faithful in using the gifts He has given her as she reaches out in love to the young people, the Moba women and the Lutheran church leaders with whom she works. Ask God to give her patience and wisdom to handle the challenges and changes she faces daily in her missionary life. Pray for good health and energy for her as she grows older. Pray for the Togolese church that the Christian faith being shared with them takes deep root in its true meaning. Pray for political stability in Togo. Ask God to provide the additional financial support Valerie needs to continue to serve in Togo.