The world can talk about the World Series in Baseball, or about the Super Bowl in football, BUT NOTHING COMPARES TO THE WORLD FAMOUS “EUCHERE CHAMPIONSHIP” at Mission Central.
This year was super special, because it was held in connection with Old Missionary Gary’s 80th Birthday!  Never in the history of this world wide event has there been the shouting, yelling, using bad words, pounding on the table, and continued accusations of cheating and attempts at secret signals!  Never, never have we ever heard or witnessed the vicious sinful language that came out of pastor’s mouths!  The tension was so thick that you could “cut it with a knife”…..THE WORLD CHAMPIONSHIP WAS AT STAKE!!
It of course, as you probably know, it is the best of 3 games, and this year, the first game was a total and complete victory for the team of Rev. Kurt “killer” Kaiser from Denison, Iowa and Rev. Patrick “slugger” Sparling from Columbus, Nebraska that came such a long distance.  This team absolutely showed no mercy, and totally DESTROYED the team of Rev. Merle “mad-man” Mahnken from Schleswig, Iowa and Gary “dumbo” Thies!
Then came the second game and THINGS TURNED COMPLETELY AROUND as it was a total and complete “disaster” for the Kaiser/Sparling team.  In the first hand it was 20 point difference for the Mahnken/Gary team.
Now, the final game was to be played and the score was tied and so close….a dead silence filled the room…never in the History of this Championship was the score so close to the very end of the game, and through (divine intervention, I’m sure)…old Dumb Missionary Gary and super star, Rev. Mahnken were crowned the WORLD CHAMPION EUCHRE PLAYERS FOR 2022!  Nothing could have been sweeter!
Attached is the Victory Photo, with Gary holding the Championship Belt, with the super star on Gary’s right and the broken losers of Sparling and Kaiser.  It is sad to see grown men cry, but Mahnken and Gary encouraged the losers to work hard and study and practice, because next year is coming when once again the WORLD CHAMPIONSHIP WILL BE HELD! 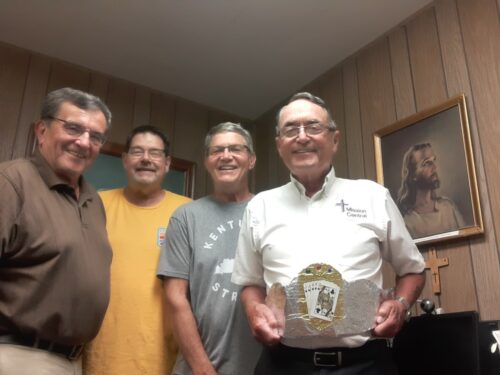