Tuesday January 28th we traveled to a congregation where we had taught before.  We actually had been to Mpando south of Blantyre twice before.  Four other villages we went to this year have been first-time locations for us.

Our training sessions were delayed by a truck stuck in the muddy road about 1 mile from Mpando, so we walked the rest of the way leaving our car high and dry.

As is our custom, we asked who had tried ideas we had taught before and what were the results.  One lady replied that there has been a big change with good yields and they now can save food for a number of months.   I asked who else had seen the same results, and a number of them raised their hands.  We congratulated them and took a picture of this group.

I asked about crop fertilization and their results.  One man used the Mzuzu special that Jacque taught about. (It is a homemade fertilizer made by mixing two containers of animal manure, one container of ashes and 10 kilograms of urea.)  We asked about his yields, and he was very pleased comparing it favorably with commercial fertilizer.  We were considering reviewing the Mzuzu special, but then learned that the man who did use that practice was the only one there with animals to provide a source of manure.

Pastor Charles Maganga, who serves this congregation, had the notes he took from Jacque’s training in 2018 and demonstrated fertilizer placement for the group.

On crop storage Joddy Maganga told how he used wood ash mixed in maize to preserve maize.  He also told us not to just set the sacks on the ground, but to put them up on wood so that air can move underneath the sacks as we had taught them.

Rev. Charles Maganga demonstrated using the PICS sack for maize storage and spoke highly of the results.  Rev. Charles mentioned keeping the entire storage area clean and to not let even one kernel remain on the floor.  Rev. Joseph Maganga told the group that both the husband and wife needed to have knowledge on how to use the PICS sacks because women are the ones taking maize to the grinding mill.

We congratulated the group for their good work and encouraged them to continue helping each other to do better.

After looking over our charts to see what had been taught before, we decided to teach new subjects. Since there were very few animals, we chose the following subjects to teach that day:

Linda taught “Changes in the Environment” emphasizing the need to plant trees and care for soil to feed the growing population.

Ralph taught about maintaining organic material in soil, referring back to Linda’s teaching on “Changes in the Environment”.  If we maintain the soil fertility as our grandfathers once had, we would have better crops.

Ralph, assisted by boys from the audience, used the sponge demonstration to show the water holding capacity and positive affect of keeping soils rich in humus.

Ralph had found desmodium growing in the road ditch.  He introduced the “Push Pull”  method of using desmodium to repel the army worm moths away from the maize (corn) plants, and planting napier grass to draw the moths into a sticky substance in the leaf whorl that entraps the moth.

Ralph and Delano used the large laminated photos and poster that Jacque had developed to demonstrate how the fields should be laid out to make the best use of this Push Pull technology.

Delano taught on Ephesians 2: 8-10 and used selected verses from the books of Mark, Hebrews and 1 Corinthians 6: 18-20, pointing out that wives fulfil Ephesians 2:10 by taking good care of their children and husbands.  Good works that husbands do to glorify God are to work hard and take good care of their families.  Satan wants to destroy the Christian family and uses alcoholism and promiscuity to separate and impoverish the family.

During the closing remarks Ralph recalled that he had seen several fields where several maize stalks were growing from one hill.  He noted how small the stalks were and that a very small ear was setting due to extreme competition among the maize plants for the soil nutrients, sun and water.  He suggested planting only one or two kernels per hill.

Note: We had previously observed that several fields had excellent maize plants with one plant per hill and others near-by had poor maize; sometimes due to over planting and some due to lack of soil fertility, lack of weeding or flooding of low areas.

Rev. Joseph Maganga gave a closing address.  The Mpando Chairman thanked fellow Christians in the LCMS for the fine church building they helped provide for them.  He asked us to continue to come to their church.

The woman’s leader said she was pleased to see us there and promised to continue the practices we taught.

Delano told the congregation how happy we were to receive such a positive report on what they are doing and encouraged them to continue to work together to make things better for themselves and their families.

Blessings to all in Jesus our Lord, 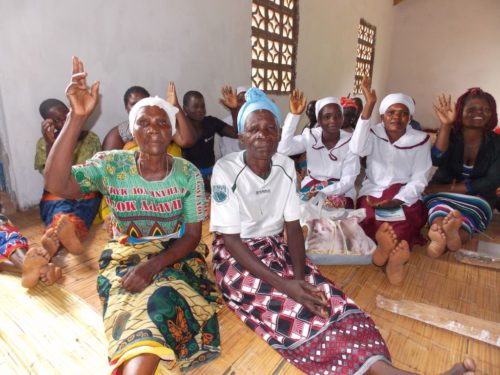 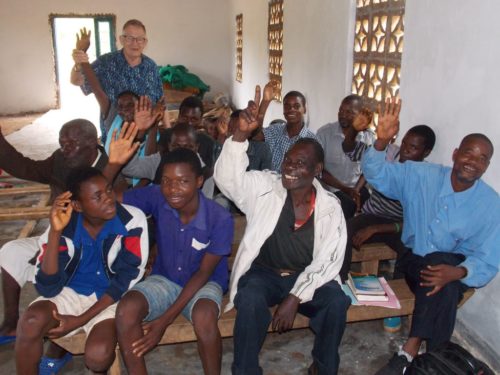