It was one of those nights that one can never, never forget!  It was the 28th of August and at 5:00PM the offices of the Lord’s Mission Central was shaken by the beginning of a special event.  It was the Birthday Event of the century!
Yes, Old Missionary Gary was celebrating his 78th Birthday…and who should come as special guests…3 NOT NORMAL pastor friends!  They had 2 objectives….ONE was to enjoy the biggest steak that we could muster here, and Old Missionary Gary did the cooking of 4 huge T-Bone steaks…and each of the other guests brought something for supper also!  However, the second objective was to see who would take home the “World’s Championship Belt” for winning the Euchre Championship of America!
After the supper together, the games began, and it was truly a “Classic Battle”!!!  There was pounding on the table, yelling, accusations, and several attempts at cheating….imagine, pastors trying to change the rules!  I’m sure that even some of them tried to pass signs and bend the rules!  In preparation for the games, Dr. Lyons brought the silver Championship belt, even with Championship rings.  After the most hard fought battles, it was after 11:00PM, and it was Thies and Kaiser against Mahnken and Lyons….after a through drubbing in the first two games, Thies and Kaiser came back and won the last two games and THE CHAMPIONSHIP OF THE WORLD ENDED IN A TIE.  Of course, the Mahnken and Lyons team thought that they should have the belt, but Thies and Kaiser stood their ground and demanded that it be a tie.
Late in the evening after the battle, here you see in front of our Boss at the Lord’s Mission Central the combatants from left to right…..Rev. Kurt Kaiser from Denison, Iowa, Rev. David Lyons from Schaller, Iowa, a 78 year old Missionary Gary, and Rev. Dr. Merle F. Mahnken of Schleswig, Iowa!  Even though some did not want to share the Championship Belt, they were forced to hold it jointly!  So, for this year….it’s a draw!   However, we are looking forward, God willing, to another battle in the future, to see who will hold the Championship Belt!!!! 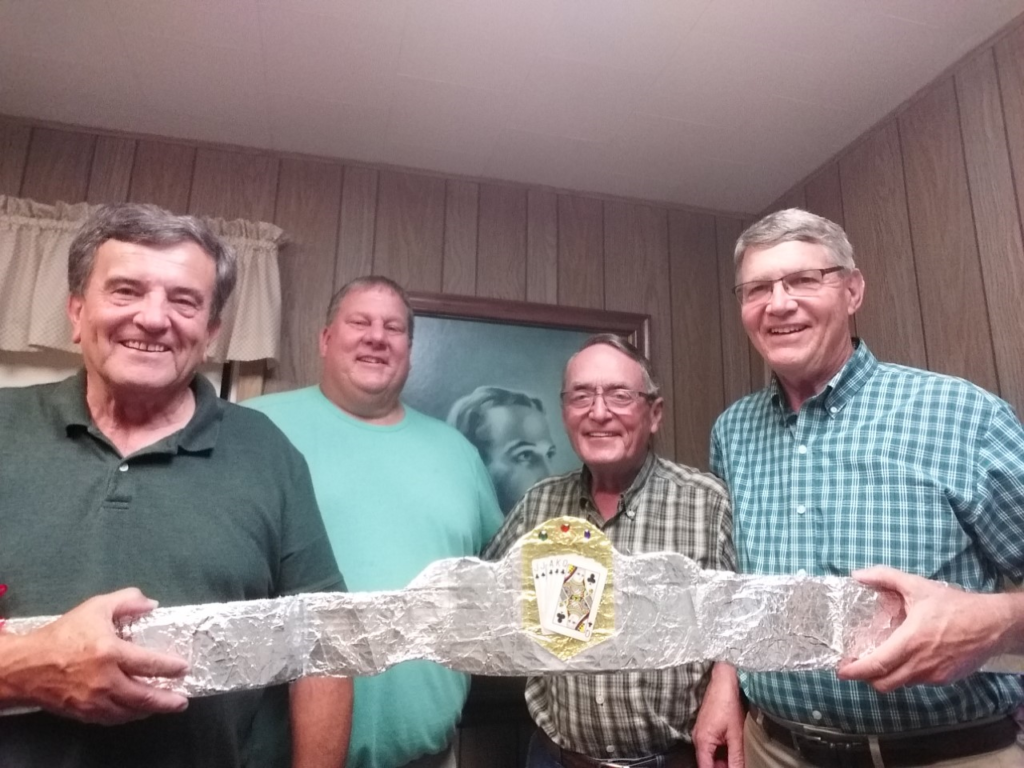